At microwave frequencies, the current-carrying area of the inner conductor is restricted to a very small layer at the surface of the conductor by an action called SKIN EFFECT.

Skin effect tends to increase the effective resistance of the conductor. Although energy transfer in coaxial cable is caused by electromagnetic field motion, the magnitude of the field is limited by the size of the current-carrying area of the inner conductor. The small size of the center conductor is even further reduced by skin effect and energy transmission by coaxial cable becomes less efficient than by waveguides.

Another part of waveguide advantages are that DIELECTRIC LOSSES are also lower than in two-wire and coaxial transmission lines. Dielectric losses in two-wire and coaxial lines are caused by the heating of the insulation between the conductors. The insulation behaves as the dielectric of a capacitor formed by the two wires of the transmission line.

A voltage potential across the two wires causes heating of the dielectric and results in a power loss. In practical applications, the actual breakdown of the insulation between the conductors of a transmission line is more frequently a problem than is the dielectric loss. This breakdown is usually caused by stationary voltage spikes or "nodes" which are caused by standing waves.

Standing waves are stationary and occur when part of the energy traveling down the line is reflected by an impedance mismatch with the load. The voltage potential of the standing waves at the points of greatest magnitude can become large enough to break down the insulation between transmission line conductors.

The dielectric in waveguides is air, which has a much lower dielectric loss than conventional insulating materials. However, one thing that makes waveguide advantages les advantageous are that they are also subject to dielectric breakdown caused by standing waves. Standing waves in waveguides cause arcing which decreases the efficiency of energy transfer and can severely damage the waveguide. Also since the electromagnetic fields are completely contained within the waveguide, radiation losses are kept very low.

Comparison of spacing in coaxial cable and a circular waveguide.

In view of the advantages of waveguides, you would think that waveguides should be the only type of transmission lines used. However, waveguides have certain disadvantages that make them practical for use only at microwave frequencies.

Physical size is the primary lower-frequency limitation of waveguides. The width of a waveguide must be approximately a half wavelength at the frequency of the wave to be transported.

For example, a waveguide for use at 1 megahertz would be about 500 feet wide. This makes the use of waveguides at frequencies below 1000 megahertz increasingly impractical. The lower frequency range of any system using waveguides is limited by the physical dimensions of the waveguides.

Waveguides are difficult to install because of their rigid, hollow-pipe shape. Special couplings at the joints are required to assure proper operation. Also, the inside surfaces of waveguides are often plated with silver or gold to reduce skin effect losses. These requirements increase the costs and decrease the practicality of waveguide systems at any other than microwave frequencies. 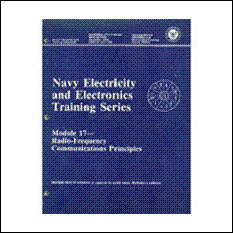 Looking for something unique for your project? Choose from the drop down menu for quick access to the item you seek.

If you like this site please pay it forward. Donations are welcome.